What ever happened to “After the Runway”? You know, where
they put all the drama related stuff, and left the design things in the normal
show hour? Oh well, I guess that’s just what the majority of watchers like:
drama. I think it’s safe to say that episode four was PACKED full of it too.
Am  I sad that Koonan
is gone? No, he was brought in like one of those “special” acts from American
Idol (remember those, back in the day?) to pretty much serve as entertainment
purposes. I don’t think it took a rocket scientist to tell that he wasn’t going
to last long.
Do I think whatever school Andrea teaches at should take her
back? No! That was such a poor exit on her part and truthfully, completely
un-professional.  Way to set the standard
there, professor.
Should Buffi still have to go? Eh, I’ll give it to the
judges: her look was no prize piece; it didn’t really fit the woman on the go “day
to night” look they were looking for. But TWO people just left. I feel like
they could have at least said, “we lost two people, let’s not get rid of
another.” But I’m not in charge, so what can I do.
Sonjia really rocked the runway this week, no doubt about
it. She was the most innovative and clever with her design and color decisions. 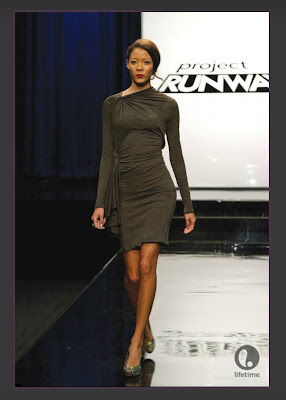 Dmitry did make a lovely dress. I’m pretty sure I’ve seen
variations of it before, maybe not as well made, but similar. I’m wary of the X
design across the bust. Women with boobs are going to look a little weird in
it, and that X design will get distorted and potentially alter the look. Maybe
it’s not that big of a deal, but for me, a girl with bigger boobs, it’s a concern. 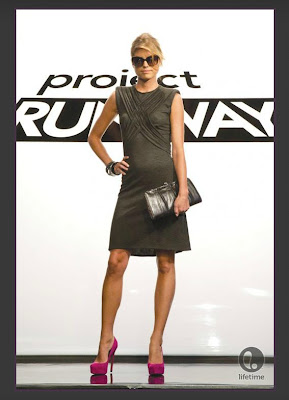 I really hate a lot of the personalities on this show, they
are just not “good people”.  Undoubtedly
Christopher is one of those people: quick to run his mouth, but makes one hell
of a dress. I’m not a fan of that dragging piece of fabric. I’m sure Nina would
say it gives it drama or whatever. But when I see it, it looks like you just
forgot to cut off the extra fabric. I’ve drawn a little arrow to show where I
would have LOVED a straight hem, maybe even a few inches higher, but that
general area. 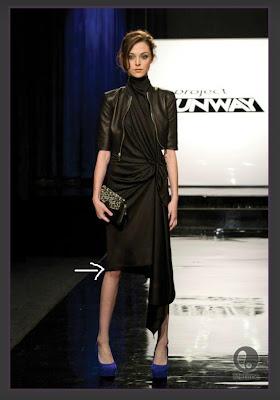 Another team
challenge next week? Blah. I always feel those are wasted weeks. No designer
ever leaves that combined creation going “wow, I really had a blast making this,”
you know? I guess it’s good for drama, and that is good for ratings.
Who was your favorite designer this week?
Love,
The Sparkle Queen