Hello Darlings!
I LOVED this week’s Project Runway All Stars! What a cool episode! If you haven’t been able to watch it, you can watch it on the My Lifetime site free! This week the designers were challenged with using lighting technology to create an avant garde design. Not only am I happy to see a new challenge, but something that’s literally cutting edge technology and the future, is awesome to see!

The only look I absolutely 100% loved was Austin’s. His mindset of, “it doesn’t have to be neon and futuristic” are some of the same thoughts I had. Not that I don’t like some of the other designs, but Austin’s was just gorgeous and so romantic. I wish we could have him do this challenge again, but with more time to really develop and complete this look how he would like, you know with more than two days to work on it, and see what he comes up with. I’m sure it would be awesome! 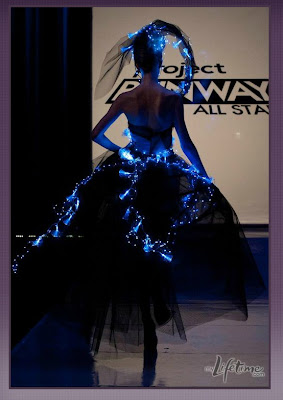 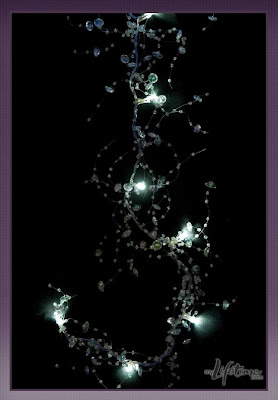 Kenley has still really yet to impress me. I don’t think it is a particularly flattering look, and I just despise that cage top. I do think the idea of putting the neon tape on the fabric was a great idea, however, the challenge is not about tape, there had to be lights involved.
I know everyone just adores Michael, and sometimes he does have some good looks, but this week, was just not one of them. Not unlike Kenley, his look was mostly based on the tape he put in the fabric instead of really having the focus be the lights. SURE he had some on the wait (ill placed I may add) and the shoulders, which made her look like an arcade game. “Meh” is what I have to say about it. I’m sure someone going to Comic-con would really appreciate the look though, just not me.

Oh Jerell … I’m sad he is gone! He was so true to his design aesthetic and that’s so uncommon, I think, in these shows. He really has his own points of view and really stands by his work, and I appreciate that.  I’m glad he used the fiber optics though in his look though, they were so pretty coming down the runway! They did create a lot of lovely shapes when they moved. I think if he would have ditched the long grandma skirt (Obviously!) and went with maybe more of a ballerina style tutu look and really emphasized those lights, he could have created something fabulous! It’s still a cool design though!

Mondo created such a beautiful look this week! I just love his whole design. The little touch of tape on the shoes was just perfect. What I really appreciated about his look was that he planned and incorporated the lights into the look. Not like they were just mashed in because they had to be. He made casing and all sorts of goodies to really make the lights a part of the dress, instead of using them as an embellishing accessory or something. Great job Mondo! Though I could do without the headpiece…
I’m just smiling thinking about how pretty Austin’s dress was! I just love it! I hope you are all as excited as I am to see what they have in store for next week’s episode! Only 4 designers remaining!
Love,
The Sparkle Queen